How Often Should You Measure Your Organization's KPIs?

Many organizations track their key performance indicators (KPIs) using a balanced scorecard approach. The collected feedback gives high-level leaders a way of monitoring the total health of an organization on a regular basis.

The Truth Behind Operational Excellence Myths Operational excellence (OpEx) can be a mystery for some people. While OpEx doesn’t have a precise definition that is fully transferable from one organization to another, certain approaches for OpEx implementation are defined. The degree to which operational excellence is achieved varies and is not an exact comparison from one team to another, but it can be measured against various auditing checklists.

Back to Basics: Eleven Things Every OpEx Manager Should Know

No matter where you are in your operational excellence (OpEx) process, it’s worth going back to basics and looking for further opportunities to drive toward perfection. In fact, because the very essence of operational excellence is continuous improvement (CI), you should expect to be constantly learning and continuously growing in your role as an OpEx manager.

Why Cross-Functional Collaboration is Essential to OpEx Do you know the story of the three blind men and an elephant? One man touches the trunk and imagines a snake. Another touches a leg and perceives it as the trunk of a tree. The third touches the ear and thinks it is a large fan. At first, each man distrusts the others because they assume they must be liars, but when they put their thoughts together, they begin to picture the elephant as it actually appears.

The "Do’s and Don'ts" of the Hoshin Kanri Catchball Process

Hoshin Kanri is a collaborative approach to driving toward long-term strategic goals in concert with completing the day-to-day work of the organization and achieving tactical objectives. "Catchball" describes the back-and-forth, up-and-down processes for sharing information, getting feedback, and building consensus that are used on an ongoing basis. Process maps have tremendous value. Remember the adage: A picture is worth a thousand words. A process map is a valuable picture of your operations, helping to illustrate clearly how things work; it shows tasks, decisions, data collection, flow of materials and information, and the sequence of process steps. This picture is far better than verbal descriptions, which might be interpreted differently from one person to another. A process map becomes documentation of setup and changes, as well as an important teaching and troubleshooting tool.

How to Make Your Continuous Improvement Program Sustainable

Do you remember Aesop’s story of the tortoise and the hare? The tortoise plods along slowly and steadily while the hare has an exciting start, racing off toward the finish line. Then the hare stops to rest, burns out, or hits some kind of obstacle. Meanwhile the slow and steady tortoise keeps chugging along and wins. Just like anything shiny and new, implementing continuous improvement has a mystique and attraction when it first hits prime time. However, after a while the newness wears off and the CI process must stand on its own merits. At times, frankly, it doesn’t.

One of the most common causes of operational excellence efforts sliding off track is leadership misalignment. This might be lack of agreement between stakeholders and practitioners, strongly differing opinions and direction within the Operational Excellence team, or even nominal leadership alignment that is actually just lip service.

“We are getting ready to deploy our Operational Excellence initiative…but struggling to define the resources needed for success.”

Resource planning is central to any operational excellence deployment path.  It must occur at the point at which the work begins to translate from a conceptual to a tactical focus. A good resource plan will consider at least three factors: the number of resources required, the competency and experience of the resources, and the resource deployment strategy.

The True Value of Standard Work: Lessons from Olympic Swimmers

As I'm sure you know, the 2016 Summer Olympic Games are off to a great start.  I know I'm not the only one who gets excited to watch the world's premier athletes compete at the highest level for the right to say that they're the best at what they do. The diverse array of events is a great attraction as it offers the opportunity to reconnect with sports like gymnastics, track & field, and swimming, that aren't necessarily ingrained into our nation's consciousness, and for sports like basketball and golf that do have greater resonance, the Olympics are compelling because the athletes we know are now performing in an entirely different context.

OpEx Budgets Are Increasing, But Do We Know How to Spend Them?

One of the more interesting data points to come out of the Process Excellence Network's 2015 State of the Industry Report was that 52.9% of respondents projected their budgeted spend on operational excellence (OpEx) to increase. This figure represents an improvement compared to a similar study done in 2013 in which less than half of respondents expected such an increase, which is great news for those who make OpEx their profession.

The United States men's and women's track and field teams are generally considered to be among the best in the world.  Some of the greatest Olympians of all time are US track athletes, including Jim Thorpe, Jesse Owens, Jackie Joyner Kersee, Florence Griffith Joyner, and Carl Lewis.

So it was no surprise heading into the 2008 Olympic Games in Beijing that both the US men's and women's track and field squads were expected to perform well. But things didn't exactly go according to expectations that year. And in order for this year's Rio competitors to prevent history from repeating itself, there are some lessons to take away from those that came before them.

In his 2004 book titled Hoshin Kanri: Policy Deployment for Successful TQM, author Yoji Akao writes “The daily crush of events and quarterly bottom-line pressures do not take precedence over strategic plans; rather, these short-term activities are determined and managed by the plans themselves.” In that one sentence, Akao has concisely and eloquently articulated why it’s crucial for organizations to invest in a meaningful strategy deployment process. Too many organizations pay lip service to the concept of strategy deployment but their management approach and daily decision making reveal that they are highly reactive and subject to the so-called “tyranny of the now.” 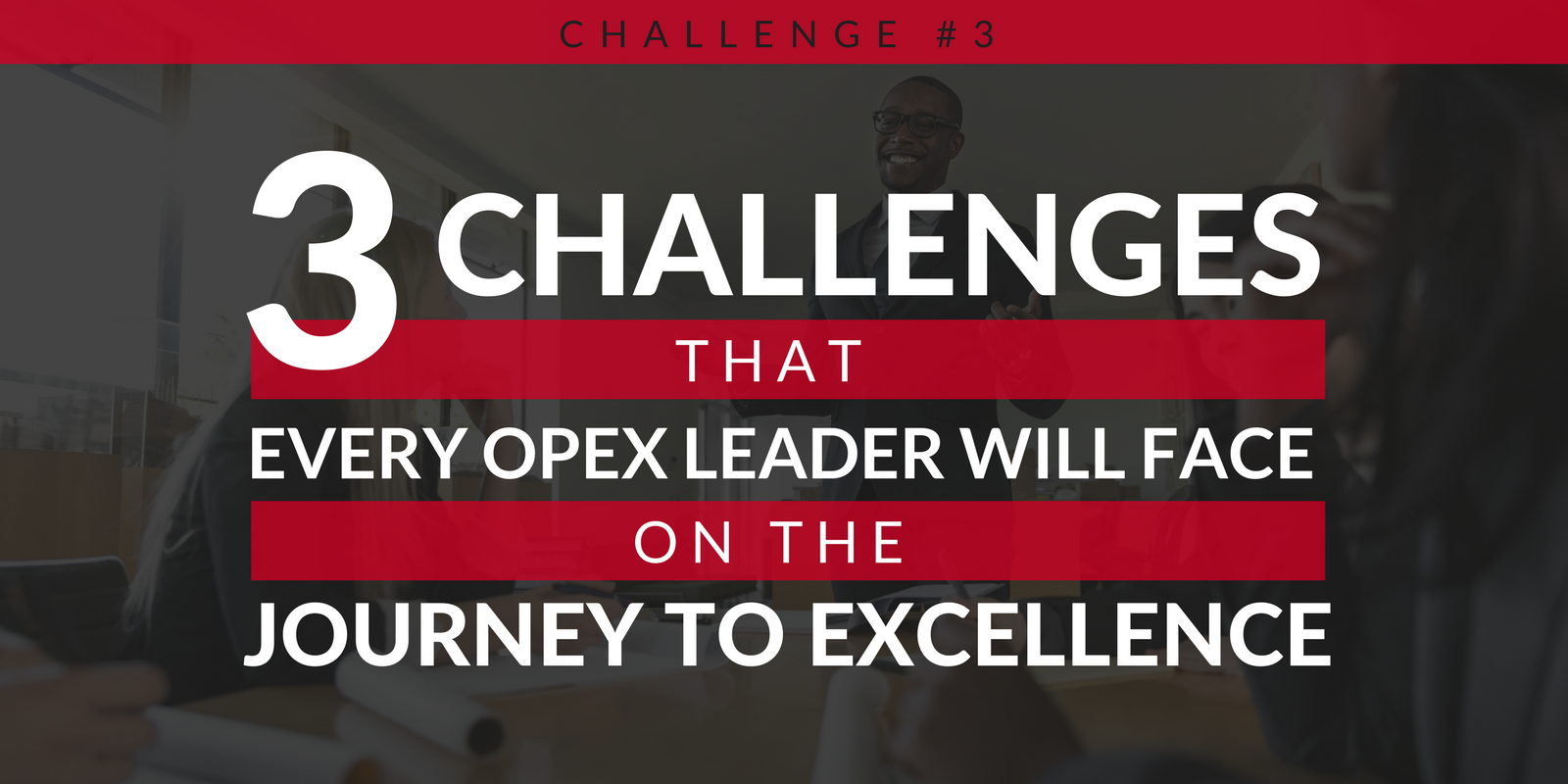 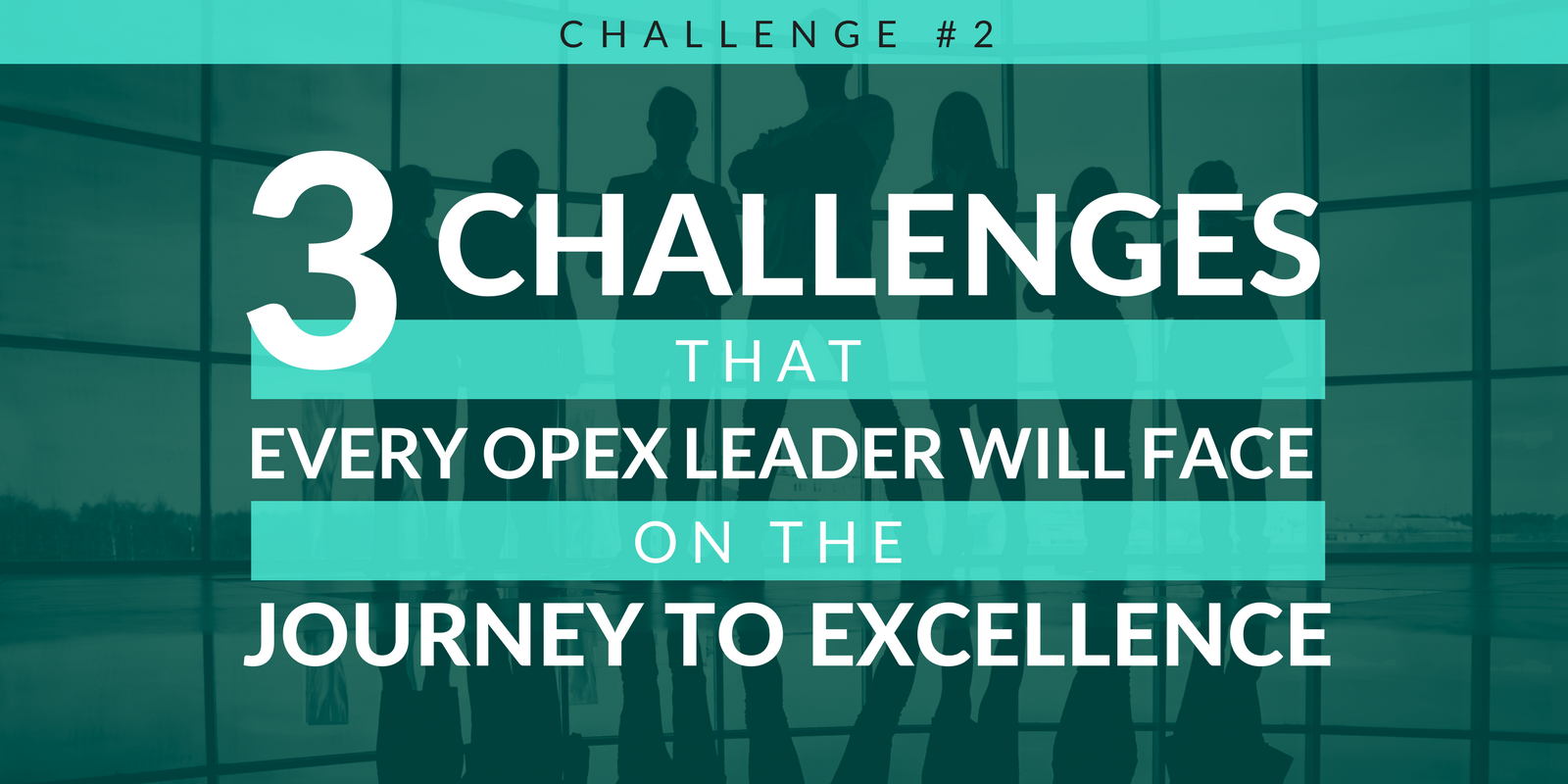 As we reflect on our work with clients across the OpEx maturity spectrum, we’ve identified 3 key challenges that every OpEx Leader will eventually need to address at some point in order to drive an approach to operational excellence that stands above the rest.  We sometimes refer to these as the 3S’s on the OpEx journey. Read on to learn about challenge #2, 'How to Scale Your Efforts'. 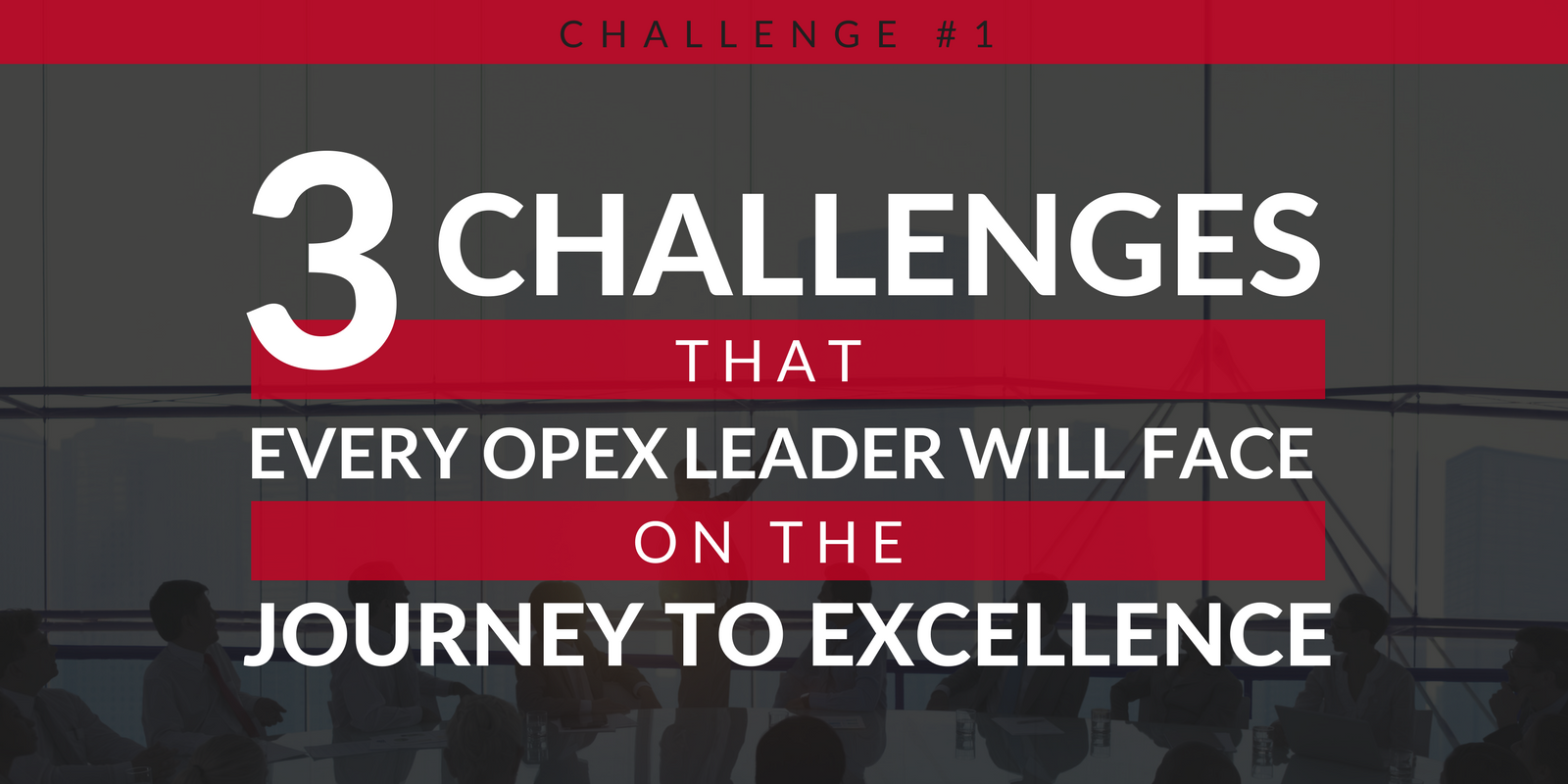 Does Your Lean Management System Lead to Meaningful Improvement? 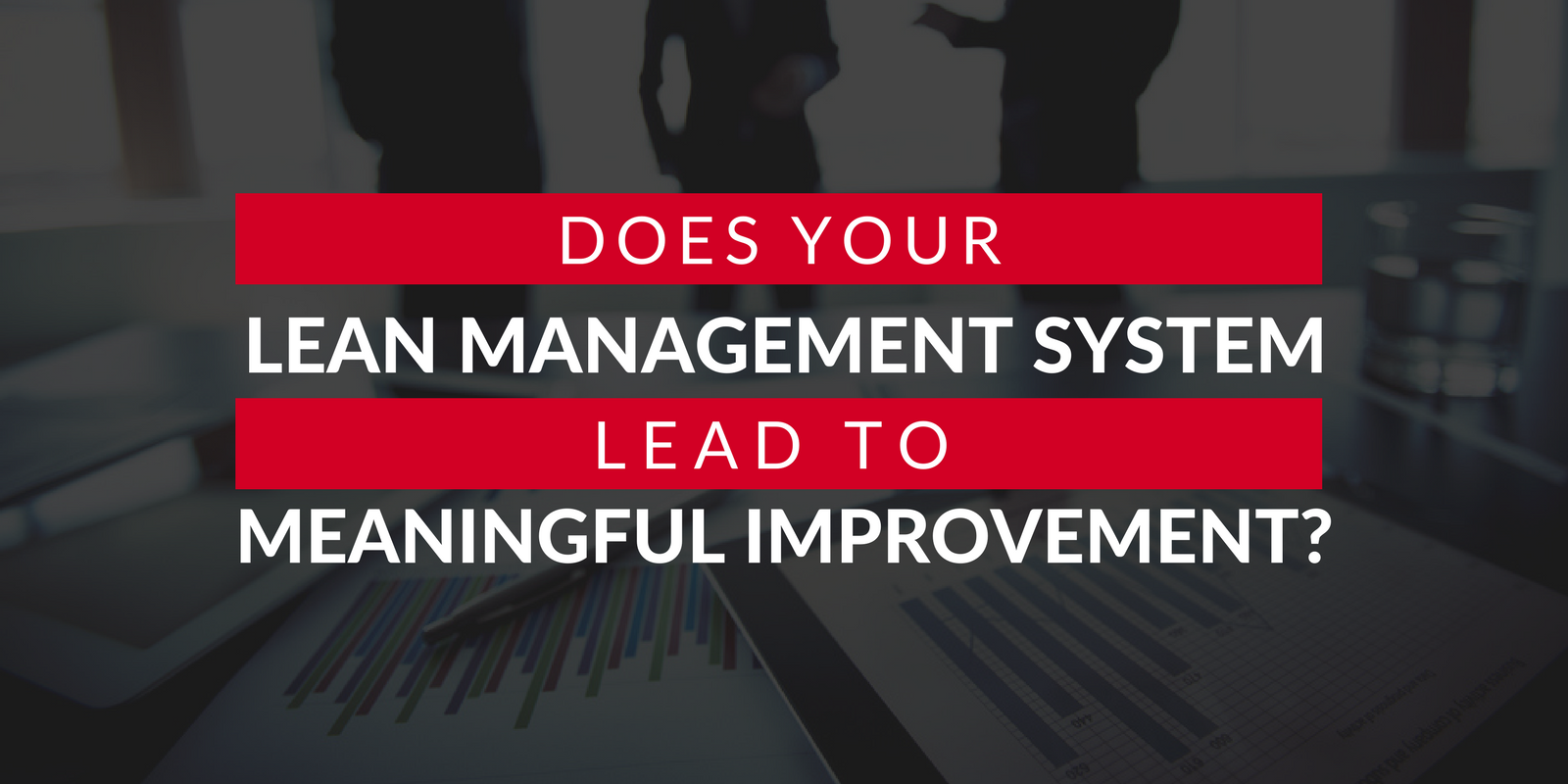 There is certainly no shortage of content on operational excellence (OpEx) and continuous improvement (CI). Unfortunately, many companies that seek improvement never get far enough in their efforts to experience sustainable change.

Is your company's OpEx efforts stuck in neutral? Are you tired of trying to implement meaningful improvements and failing to make them stick?

If so, it's time to assess the health of your company's lean management system (LMS). 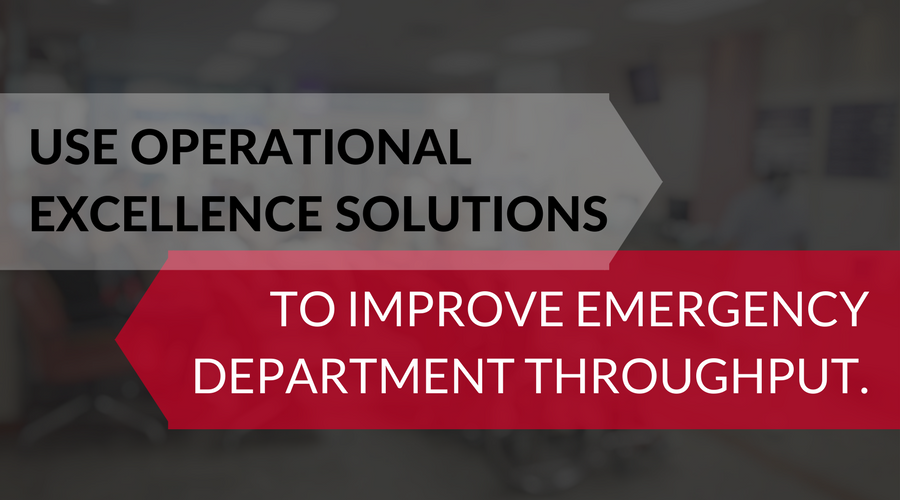 The typical emergency department (ED) is a case study in dealing with catastrophe and chaos…at least on television. Even in the real world, 24/7 ED operations have tremendous flux and uncertainty. During the busiest times, staff members may struggle to stay ahead of patient problems, leading to slow throughput in the process, translating to long waiting times for patients.

Ask many ED visitors if they feel their issues received “emergency treatment” and they will say no. When patient waiting time is longer than expected, overall patient satisfaction declines. Most emergency departments have plenty of opportunity to improve.

3 Benefits Of An Operational Excellence Platform

Using the right operational excellence solution will make a dramatic difference in the way you do business. From the moment you implement EON, you’ll see the benefits reverberating across your company to create positive change.

Here’s the kind of excellence you’ll encounter every day.